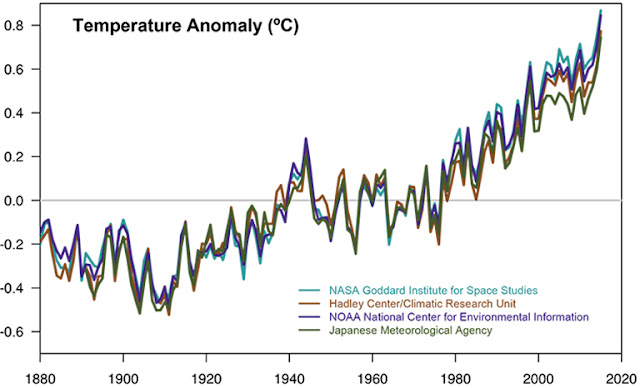 A new study by the UN finds that global warming is about to heat up.  In just 12 short years:

The world’s leading climate scientists have warned there is only a dozen years for global warming to be kept to a maximum of 1.5C, beyond which even half a degree will significantly worsen the risks of drought, floods, extreme heat and poverty for hundreds of millions of people....The half-degree difference could also prevent corals from being completely eradicated and ease pressure on the Arctic, according to the 1.5C study, which was launched after approval at a final plenary of all 195 countries in Incheon in South Korea that saw delegates hugging one another, with some in tears.[1]

According to the UN Intergovernmental Panel on Climate Change (IPCC) the targets that must be reached are obtainable but at the extreme end of the Paris agreement,They are based upon keeping the temperature  between 1.5C and 2C. [2]

The world is currently 1C warmer than preindustrial levels. Following devastating hurricanes in the US, record droughts in Cape Town and forest fires in the Arctic, the IPCC makes clear that climate change is already happening, upgraded its risk warning from previous reports, and warned that every fraction of additional warming would worsen the impact.Scientists who reviewed the 6,000 works referenced in the report, said the change caused by just half a degree came as a revelation. “We can see there is a difference and it’s substantial,” Roberts said.At 1.5C the proportion of the global population exposed to water stress could be 50% lower than at 2C, it notes. Food scarcity would be less of a problem and hundreds of millions fewer people, particularly in poor countries, would be at risk of climate-related poverty.[3]

Of course we are stuck with a foux President who is married to big coal and wont abandon it because he's enriching himself that way, A memo written by major coal executive Robert E. Murray, (a longtime Trump supporter and major contributor)  reads like a Trump legislative play book with  half the items acted upon in the opening months of the administration,[4] So while we are in the last few years when we must   work to save the planet we  wont do a damn thing because the government of the most powerful nation is hamstrung by the stupidity of it's mos illiterate people. The Republicans have amassed a huge propaganda machine devoted to the notion that, as Trump says, "it's just a hoax." But the science could not be more agaisnt them. The science is overwhelmingly in favor of the thesis that man made carbon sources are the major contributing factor to warming,

One important sign of the validity of a hypothesis is it;s use in scientific  work in other areas. For example medical science works by assuming evolutionary theory. If the work based upon those assumptions did not pan  out it would be apparent that the evolutionary assumptions upon which they  are based were not valid.


Despite these details, it's important to remember that, in the end, hypothesesand theories live and die by whether or not they work — in other words, whether they are useful in explaining data, generating expectations, providing satisfying explanations, inspiring research questions, answering questions, and solving problems. Science filters through many ideas and builds on those that work![5]

"The contributions of Paul Romer and William Nordhaus are methodological, providing us with fundamental insights into the causes and consequences of technological innovation and climate change. This year's Laureates do not deliver conclusive answers, but their findings have brought us considerably closer to answering the question of how we can achieve sustained and sustainable global economic growth." [7]


Multiple studies published in peer-reviewed scientific journals1 show that 97 percent or more of actively publishing climate scientists agree: Climate-warming trends over the past century are extremely likely due to human activities. In addition, most of the leading scientific organizations worldwide have issued public statements endorsing this position. The following is a partial list of these organizations, along with links to their published statements and a selection of related resources.[8]

2) The greater the climate expertise among those surveyed, the higher the consensus on human-caused global warming.[9]

A key finding from our meta-study was that scientific agreement was highest among scientists with the most expertise in climate science. This meant that groups with lower climate expertise showed lower agreement on climate change. The group with the lowest level of agreement—at only 47 percent—were economic geologists, who study metals and minerals that can be used for industrial and economic purposes. Conversely, the group with the highest level of agreement—at 97 percent—were climate scientists who were actively publishing climate research.[10]

Notice that all of these opinions are tied to research, They are based upon studies they are the opinions of the researchers, Notice that the higher the level of expertise the stronger the  agreement with the thesis. What is being agreed with is clear, that humans are the catylist in accelerating global warming,
As long as Trump occupies the white house earth is doomed,. We must act! Our only chance is to  take control from the  Republicans in this coming  mid term election. We cannot fail. We must do this,send this to all your friends and be sure and vote Democrat at least in congressional and senate races but really no reason not to vote straight ticket,
A lot of people are now making the argument that the Democrats are just sold out to big money as the Republicans, The problem is we really did have the regulations and programs under the Dems that the Reps now want to kill. It is,Therefore, not true that there is no party difference,

Watts is Global Environmental editor of the Guardian

None of the data matter to those determined not to believe it and to question the motives of those promoting the 'climate agenda.' Every piece of 'evidence' comes already ideologically tainted. Of course, if the situation were reversed, if 97% of climate scientists believed that climate change wasn't driven by human activities, that would be the climate deniers' mantra.

Sure of course. But what else can we do but repeat our own mantra? Our mantra is the research.

I ran this by Dr. Jay Wile of Proslogion. He had something to say about it in the comments of this entry:

Proslogion: Does Anybody Really Know How Hot It Is

who is Dr ay what does he do?I;ve lost patience with conversation idiots

Proslogion: Does Anybody Really Know How Hot It Is
- Pseudo-scientific bullshit. Just like your stupid "Science Against Evolution". It's quackery by charlatans with an ideological agenda.

mark the calendar Skep, we agree,