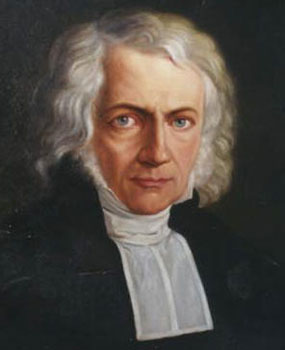 Most Christians have a jaundiced view of liberal theology; for most Evangelicals, the term "liberal theology" conjures up images of the Jesus Seminar, Bishop Sprong assaulting the truth of Holly Scripture, questions about Jesus' existence, and the fomentation  of doubt and unbelief. Liberal theology has had a long tradition that very much pre-dates the Jesus seminar. The liberal tradition in Christianity is actually called "the liberal recessionary tradition" and it stretches back to a certain brand of Orthodoxy that was far more the majority than was the Evangelical movement just after the enlightenment. In this series I will briefly examine the history of liberal theology, and overview a few of my favorite "liberal" theologians.

The difference between conservatives and liberals is rooted in two fundamentally different methods of doing theology. The conservative tradition is authoritarian in method. The liberal theological tradition, by contrast, adopts a method in which truth claims are subjected to experience and reason.

Conservative theology begins with the assumption of some divine revelation. This revelation is held to be immune from rational critique, vouchsafed by the testimony of miracles, understood as supernatural intervention. If there is any kind of evaluation of religious beliefs, the evaluation will be governed under norms derived from the tradition. "X is true because the Bible or the church says so."

The liberal theological tradition assumes that Christian stories and belief systems can claim no exemption by virtue of unique origin. No truth claim is immune to criticism. The liberal theologian is not merely responsible to an internal criterion of a particular religious tradition, but is also responsible to the same kind of criteria and debate that guides other fields of knowledge. In other words, theological statements must conform to publicly defensible and revisable canons of investigation and validation. The liberal will humbly concede that this method is fallible, while acknowledging that only God can claim the realization of total knowledge.

We could add to this definition that in the modern era, especially since Baultmann, the impetus of liberal theology is not so much to subject the Bible to reason, as to translate the Gospel into terms meaningful to contemporary society. Be that as it may, I'll get back to that shortly.Liberal theology is most often thought of as a counter to "orthodoxy," but for most of its history the liberal view was more in line with Orthodoxy and the Evangelicals and their forerunners were on the lunatic fringe. Three major movements that preceded the Evangelical; the Pruitans (sixteenth century England), the Pietists (seventeenth century Germany) and the Evangelicals (nineteenth century England and America), all were kept at bay by the mainline orthodoxy which controlled the major denominations, and all three were radical movements that sought to restore a bogus ancient flavor to Christianity while moving away from the liberals who had come to control the Orthodox centers.

The dichotomy between reason and faith in religion goes very far back in Christian origins. In Early modern times it emerges as rationalism vs. voluntarism, but it can be found in the middle ages between Scholastics and nominalists. We should not be at all surprised to find the Enlightenment as a major source of liberal theology, and so it was. Nevertheless, there are other sources that even preceded the enlightenment. Since a major motivational force for liberal theology has been rationalisms, many antecedents from the Reformation and skeptical crisis in Europe can be found, thus pre dating the enlightenment. The same antecedents which pushed the Enlightenment also forged the impetus for liberal theology.

But I'm going to skip up 19th century, because my historical writing is long,boring, and ponderous,and because real liberal theology begins in the 19th century. See comment section for my development the antecedents renaissance and reformation.

It was out of this Kantian quagmire that liberal theology proper really gets going. Libeal theology begins with the attempt of a faithful follower of Kant, Frederich Schliermacher,(1768-1834) to restore God as the object of theological discourse. As a Kantian Schleiermacher knew that God is not given in sense data. Also as a Kantian he knew that God had to be on a par with the necessary categories but that we had to have to some form of interaction with experience. It was out of this problematic  that he realized that one could go around the sense data and find interaction of the mind with God in the form of our basic consciousness of the concept of God itself. From this notion Schleiermacher emerged with his famous dictum, the "feeling of utter dependence." Through this concept God was once again placed as the object of theological discourse and the basic method of liberal theology was born. Schleiermacher is known as "the father of liberal theology" for this reason.

Schleiermacher was important to three theological traditions; he is called "father of liberal theology," meaning liberal protestant theology, during the ninetieth century. He was important in circles of German piety and popular among the Evangelicals, and he is also traced as one of the progenitors of the Unitarian Universalism tradition. He's largely forgotten by all three today, although still studied in liberal seminaries. Other figures became important to nineteenth century liberal theology:

Schleiermacher, in On Religion: Speeches to it's Cultured Dispisers, and The Christian Faith.sets forth the view that religion is not reducible to knowledge or ethical systems. It is primarily a phenomenological apprehension of God consciousness through means of religious affections. Affections is a term not used much anymore, and it is easily confused with mere emotion. Sometimes Schleiermacher is understood as saying that "I become emotional when I pray and thus there must be an object of my emotional feelings." Though he does venture close to this position in one form of the argument, this is not exactly what he's saying. In the earlier form of his argument he was saying that affections were indicative of a sense of God, but in the Christian Faith he argues that there is a greater sense of unity in the life world and a sense of the dependence of all things in the life world upon something higher.What is this feeling of utter dependence? It is the sense of the unity in the life world and it's greater reliance upon a higher reality. It is not to be confused with the starry sky at night in the desert feeling, but is akin to it. I like to think about the feeling of being in my backyard late on a summer night, listening to the sounds of the freeway dying out and realizing a certain harmony in the life world and the sense that all of this exists because it stems form a higher thing. There is more to it than that but I don't have time to go into it. That's just a short hand for those of us to whom this is a new concept to get some sort of handle on it. Nor does"feeling" here mean "emotion" but it is connected to the religious affections. In the early version S. thought it was a correlate between the religious affections and God; God must be there because I can feel love for him when I pray to him. But that's not what it's saying in the better version.

The basic assumptions Schleiermacher is making are Plaontic. He believes that the feeling of utter dependence is the backdrop, the pre-given, pre-cognitive notion behind the ontological argument. IN other words, what Anselm tried to capture in his logical argument is felt by everyone, if they were honest, in a pre-cognitive way. In other words, before one thinks about it, it is this "feeling" of utter dependence. After one thinks it out and makes it into a logical argument it is the ontological argument."Life world," or Labeinswelt is a term used in German philosophy. It implies the world of one's culturally constructed life, the "world" we 'live in.' Life as we experience it on a daily basis. The unity one senses in the life world is intuitive and unites the experiences and aspirations of the individual in a sense of integration and belonging in in the world. As Heidegger says "a being in the world." Schleiermacher is saying that there is a special intuitive sense that everyone can grasp of this whole, this unity, being bound up with a higher reality, being dependent upon a higher unity. In other words, the "feeling" can be understood as an intuitive sense of "radical contingency" (in the sense of the above ontological arguments).He goes on to say that the feeling is based upon the ontological principle as its theoretical background, but doesn't' depend on the argument because it proceeds the argument as the pre-given pre-theoretical pre-cognitive regularization of what Anselm sat down and thought about and turned into a rational argument: why has the fools said in his heart 'there is no God?' Why a fool? Because in the heart we know God. To deny this is to deny the most basic realization about reality.

[1] "Urbie" (Scott Grosss) as we friends on Doxa Forums  affectionately knew him, was brilliant, cleaver, hilarious, and true intellectual. He actually knew Schubert M,Ogden world famous theologian  who I studied with briefly at Perkins. Scott was assigned to drive him about while lectured at Clairmont in California. Scott was studding on his doctorate there with Charles Hartshorne. Scott was an expert in process theology and also knew panpsychism and he was the person who convinced me to write my book, Trace of God. He was a great guy he contributed a lot to my life I mourn his passing.