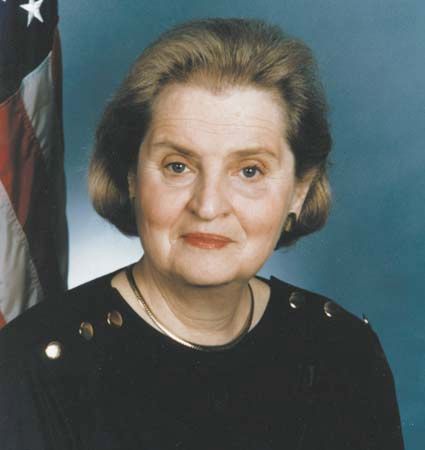 Madeleine Jana Korbel Albright is an American politician and diplomat.
She is the first woman to have become the United States Secretary of State.
She served from 1997 to 2001 under President Bill Clinton.Wikipedia

On April 28, 1945 — 73 years ago — Italians hung the corpse of their former dictator Benito Mussolini upside down next to a gas station in Milan. Two days later, Adolf Hitler committed suicide in his bunker beneath the streets of war-ravaged Berlin. Fascism, it appeared, was dead.
To guard against a recurrence, the survivors of war and the Holocaust joined forces to create the United Nations, forge global financial institutions and — through the Universal Declaration of Human Rights — strengthen the rule of law. In 1989, the Berlin Wall came down and the honor roll of elected governments swelled not only in Central Europe, but also Latin America, Africa and Asia. Almost everywhere, it seemed, dictators were out and democrats were in. Freedom was ascendant.
Today, we are in a new era, testing whether the democratic banner can remain aloft amid terrorism, sectarian conflicts, vulnerable borders, rogue social media and the cynical schemes of ambitious men. The answer is not self-evident. We may be encouraged that most people in most countries still want to live freely and in peace, but there is no ignoring the storm clouds that have gathered. In fact, fascism — and the tendencies that lead toward fascism — pose a more serious threat now than at any time since the end of World War II.
[Get more of the biggest debates of the day right in your inbox by signing up for the Opinion newsletter.]
Warning signs include the relentless grab for more authority by governing parties in Hungary, the Philippines, Poland and Turkey — all United States allies. The raw anger that feeds fascism is evident across the Atlantic in the growth of nativist movements opposed to the idea of a united Europe, including in Germany, where the right-wing Alternative für Deutschland has emerged as the principal opposition party. The danger of despotism is on display in the Russia of Vladimir Putin — invader of Ukraine, meddler in foreign democracies, accused political assassin, brazen liar and proud son of the K.G.B. Putin has just been re-elected to a new six-year term, while in Venezuela, Nicolás Maduro, a ruthless ideologue, is poised to triumph in sham balloting next month. In China, Xi Jinping has persuaded a docile National People’s Congress to lift the constitutional limit on his tenure in power.
Continue reading the main story
Advertisement
Continue reading the main story

she talks about her Book warning of Fascism see the video


"Woe to those who make unjust laws, to those who issue oppressive decrees, to deprive the poor of their rights and withhold justice from the oppressed of my people making widows their prey and robbing the fatherless.What will you do on the day of reckoning,..." Isaiah 10:1-3

I see far too many people dismissing the ones pointed out to them as hyperbole and exaggeration - which is exactly what happened in the cases these warning signs grew out of.

I agee. But Albright is not one to fly off the handle.