Obama's Econmy: Helll in a Hand Basket? with 5.1% Unemployment?

Trump still trying to play champion of the common man wshinimng about how we are going to hel in a hand basket, it's a lie.here are the latest figure bureau of labor stats

September 14, 2016U.S. import prices declined 0.2 percent in August, after ticking up 0.1 percent in July. The August downturn was driven by lower fuel prices. Prices for U.S. exports decreased 0.8 percent in August following a 0.2-percent increase in July. Full text: (HTML) (PDF)
Subscribe to the BLS News Service to receive the above news releases by e-mail.

Data in archived news releases may have been revised in subsequent releases. The latest data, including any revisions, may be obtained from the databases accessible on the program homepages.

Below is an old post fro, Feb but it was not bad even then. 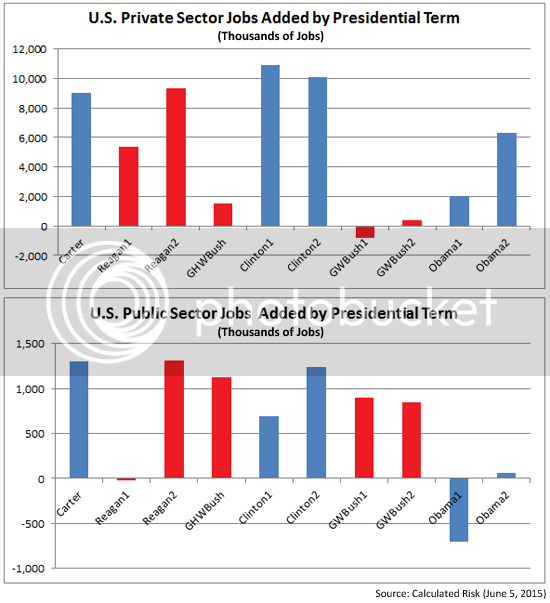 
Trump has made the statement "The country is going to hell in a hand basket." Let's look at the figures? See those little red stumps on the upper graph? That's Bush's Job growth. One is negative. Obama's much better. It's not as good as Clinton's or even Reagan's (see the graph, Clinton blue) but Obama had a much worse economic crisis that he inherited.

Even a conservative publication such as the Economist says that "the president's record is a lot better than the woes of America's economy suggests." The article points out that Obama faced the most grim economic conditions since 1933, After detailing failure in comic growth and housing market for most of Obama's two terms only picking up late in second term the articles finds all economic recoveries are slow. This a far cry from hell in a hand basket. Since the article is not lauding him as stupendous or berating him for causing every sill since the great depression, it's probably a fairly objective appraisal. [3]

Email ThisBlogThis!Share to TwitterShare to FacebookShare to Pinterest
Labels:
Posted by Joseph Hinman (Metacrock) at 1:16 AM

Labels: economy, elections, Obama, Obama has done great considering what he had to work against., Politics

If I may ask, are you a democrat? Where do you stand in politics?

Joseph Hinman (Metacrock) said...
This comment has been removed by the author.
3:58 PM

Joe is a member of the party that booed God. He is not a christian. He is a socialist marxist globalist who wants to make everybody poor with his "equal distribution of wealth and property"...taxes taxes taxes to keep every body poor and pass more regulations to enslave us to some wicked world elitist class society.

how did you know?