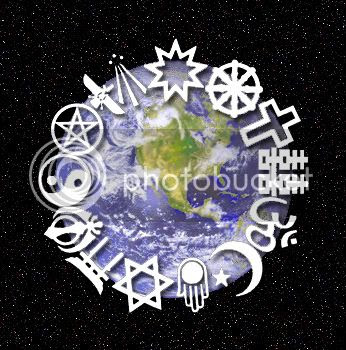 I have my universalism perspective that comes in form mystical theology. It's still a Jesus-centric universalism. Here's how it works. A recent post on CARM gave a good opportunity to summarize my position.


On CARM
Originally Posted by troxel

Care to defend this?

Meta:
you are not thinking about reality. The way atheists usually judge the truth of religion is a strange thing. They sort of divorce it from the way we understand reality and the way we look at the world in all other words and kind of pretend that if a tradition accepts a certain view point then it exist in a real world where that doctrine is true. I know they actually bleieve this but the appraoch in that way.

The only thing that is more odd is that atheists feel the need to enter those little worlds and mess them up, they continue to see them as real. Church of Christ don't live in their own world (except the conceptual world) where their exclusivity God sends anyone to hell who doesn't have baptism by dunking. That is part of their conceptual world but it's not real. That they think that does not count against the Catholic view of God or the Tillich view of God. It's just that there are some people who think this wrong thing about God.

All concepts of God point to God, but that doesn't mean that God is made up out of all of them. That's what the Point-to clause is about. Their view is not God it just points to god. That is to say, the reality that inspires all religious traditions is understood vegly, badly, partially or not at all. Its' still there. It's not a composite of all the others and it doesn't make a bit of difference if the others are stupid or wrong or bad, they don't spoil the truth of what they point they just point to it.

We all experience God at some level, but that level is usually beyond words, usually subconscious. For those who have dramatic experiences of it those experiences are usually on a level that can't be communicated in words. To talk about it we have to compare it to things we know that means we have to filter it through constructs. All constructs are cultural; so religoius traditions are different because they are rooted in different cultural realities.

It doesn't matter that they contradict. the reality is not made up of those differences. The reality is beyond our understanding, it has to be experienced. The contradictions are in the constructs not the thing itself.

Yes one can attempt to distill out perennial philosophies that run through many religious thoughts. I don't have much problem with that notion. However it is an egregious mistake to claim that all gods point to God as many religious concepts are inherently flawed and even destructive.

Meta:
again you have them all in their own worlds as though there are thousands of God's the different tradition are literally in different demonstrations compete with their own Gods.

the fact that some group of hate fulled morons get's it wrong does not discredit the idea of One reality behind all traditions. most of those moron groups are not valid traditions. They are cults, spliter groups, fanatics and extremists they don't represent the traditions they broke away from.

Christianity is the tradition. The fundies in Christianity are not the tradition they are subject groups and most of them invalid and not representative of the faith as a whole. Against its' the constructs that are wrong. All of those fanatics groups named above are defined by the constructs and the culturally bound association that separate them from their tradition. We can see this clearly because they involve political differences.

Most people are going to say that to be a Christian one must believe in the exclusive nature of Jesus. How can I be a Christian and believe that God is working in all cultures? Paul did.

Paul said "To those who through persistence seek glory, honor and immortality he will give eternal life.But for those who are self-seeking and who reject the good and follow evil there will be wrath and anger...first for the Jew and then for the gentile; but glory honor and peace for everyone who does good. For God does not show favoritism. All who sin apart from the law will perish apart form the law and all who sin under the law will be judged by the law. For it is not those who hear the law who are righteous in God's sight, it is those who obey the law who will be declared righteous.

Indeed when Gentiles who do not have the law, do by nature things required by the law, they are a law for themselves even though they do not have the law, since they show that the requirement of the law are written on their hearts, their consciences bearing witness and their hearts now accusing, now even defending them..." (Romans 2:7-15). New American Standard and other translations say "their hearts accusing, now excusing them..." Most Christians are afraid of this conclusion and they down play this verse. Often Evangelicals will come back and say "he makes it clear in the next passage that no one can really follow the law on their hearts." Well, if they can't, than they can't. But if they can, and do, than God will excuse them. God knows the heart, we do not. The verse clearly opens the door to the possibility of salvation (although by Jesus) thorugh a de facto arrangement in which one is seeking the good without knowing the object one is seeking (Jesus). In other words, it is possible that people in other cultures who follow the moral law written on the heart know Jesus de facto even if they don't know him overtly. Paul backs up this conclusion in Acts 17:22 Paul goes to Athens as is asked by the Athenian philosophers to explain his ideas to them.

These were pagan followers of another religion. Paul stood up and said to them, "Men of Athens, I see that in every way you are very religious for as I walked around and observed your objects of worship I even found an alter with this inscription 'TO AN UNKOWN GOD' Now what you worship as something unknown I am going to proclaim to you."He basically says that they are worshiping God, they just don't know who he is. That's why he says "I will make it known to you." He doesn't say "you have the wrong idea completely." Most Evangelicals dismiss this as a neat rhetorical trick. But if we assume that Paul would not lie or distort his beliefs for the sake of cheap tricks, we must consider that he did not say "you are all a bunch of pagans and you are going to hell!" He essentially told them, "God is working in your culture, you do know God, but you don't know who God is. You seek him, without knowing the one you seek. He goes on,(v27)"God did this [created humanity and scattered them into different cultures] so that men would seek him and perhaps reach out and find him though he is not far form each one of us." This implies that God not only wants to work in other cultures, but that it is actually his paln to do things in this way. Perhaps through a diversity of insights we might come to know God better. Perhaps it means that through spreading the Gospel people would come to contemplate better the meaning of God's love.

In any case, it does mean that God is working in other cultures, and that God is in the hearts of all people drawing them to himself. Of their worship of idols, Paul said "in past times God overlooked such ignorance but now he commands all people everywhere to repent" (v30). Now what can this mean? God never overlooks idolatry or paganism, in the OT he's always commanding the Israelite to wipe them out and expressly forbidding idolatry. It means that on an individual basis when God judges the hearts of people, he looks at their desire to seek him, to seek the good. That their status as individuals in a pagan culture does not negate the good they have done, and their ignorance of idolotry does not discount their desire to seek the good or the truth. IT means that they are following Jesus if they live in the moral life, even though they follow him as something unknown to them. IT also means that all of us should come into the truth, we should seek to know God fully, and when we do that we find that it is Jesus all along.

Jesus is the revelation not the institution called "chruch." Jesus is working among all people to bring them to seek God's love. If people are seeking the love of the true creator its that by which they will be judged not an institution, flag, or political tendency. How closely did they seek the love of this universal mind that is the ground of Being? That will determine the extent to which they treated people rightly.
Posted by Joseph Hinman (Metacrock) at 1:51 PM