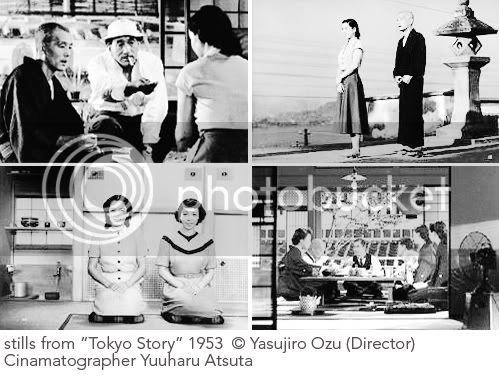 Kurosawa is the Western Japanese film Genius, Ozu is Japan's Japanese director. Kurosawa was criticized by critics in Japan as being too Western (in which he took pride--even though he was trained as a samurai). Ozu was one who was hailed by critics of his own country as epitomizing their own style and flavor of film. What that means for the western film buff is long and boring! Not to say the film is no good. It's an excellent film, it deserves to be thought of as up there with Bergman's Wild Strawberries, and Di Sica's the Bicycle Thief, some have said it's one of the greatest films ever made. But Western viewer beware! To get the point where you enjoy and appreciate this film you are going to have to learn to love films where nothing happens. The true Japanese spirit of film is a long ambling slice of life that takes forever to unwind. Once you stick through it all the way it's rewarding, but it's getting there that's the trouble. Another great Ozu film that might be easier to start on, which I also love, is Floating Weeds.

Tokyo Story (1953) is longer and harder to get through. Since I'm not a professional critic I will relay my personal connection. This film is about an old couple and their children who don't have time for them. Since I cared for my parents for three years at the end of their lives this film meant a lot to me. The old couple goes to Tokyo to see their children the only one who is actually glad to see them and has time for them is their Daughter-in-law whose husband is dead. Despite the fact that she is not blood kin, she's the one who is genially glad to see them and sacrifices for them. 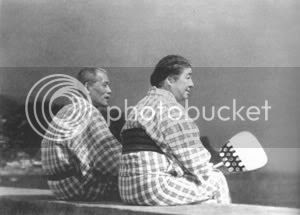 The Old couple sit at the sea wall and talk about how
their kids don't want them.

Now that the reader has been warned about the daunting aspect, the reward from watching the film is immense. The cinematography is amazing. Ozu loves to give reflective shots that dwell on some city scape or a view over the tile roofs of the village where the old people are from. These are beautiful and artistic shots that, even though black and white, play up the beauty of Japan and provoke a reflective mood. The shots across those tile roves are wonderful. That's one of my favorite things about the move. The oldest son's wife is so mercenary and selfish but it's not heavy handed. One is easily lulled into a tranquil state thinking nothing is going on these guys are talking about clothes and what they ate for dinner and memories of childhood, yet lurking behind this innocent scene is a host of indications that the people just don't have time for anyone but themselves. One the major sings of the younger couple's neglect and their general state of malaise is the tantrums their children through. Their children don't recognize the grandparents, have no interest in being with them, and act super spoiled because they don't get their way on some small thing. If one notices one can see the attitudes in the mother. The parents (the children of the old people) are just faded worn out versions of the small tantrum throwing children.

The Daughter-in-law is genuinely glad to see them, reaches out to them as the only family she has. Of course one might imagine her sister and brother in-laws are of no help to her. This is early 50,s Japan is still getting over the war, they are resigned to being U.S. allies, they are going whole hog for American things, yet the country is still very poor. The houses they live in have paper walls and they sit on the fool, although the affluent oldest son's house has western chairs. The level of Asian sociology observed is very educational. We all the face saving tactics of a day in Japan in that era. In the end there's a family crisis. The Family gathers. The youngest sister, who is a teacher is appealed at the selfishness of the older ones. Ironically its' the daughter-in-law the only one who had time for the grandparents, who defends her brother and sister's in law. It's not because they are evil, it's not becasue they are mean, it's not even becasue they don't love their parents. Its' because they are caught up in life. They have children of their own. Here a wonderful universality to human nature shines through, one can see one's own family, one's own situation and values and love, failures, reflected in these Japanese people, regardless of being Texan or wherever one is from. Like all great art Ozu manages to bring out the universal aspects of the human condition. Posted by Joseph Hinman (Metacrock) at 7:48 AM