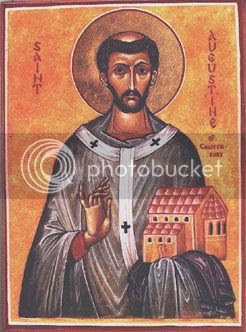 
I've been discussing the concept of St. Augustine that God is truth. This upsets the atheists more than anything I've seen in some time. The real import of the issue is about Tillich's implied Ontological argument. I will discuss that next time. This is necessary precursor to that material.

…St. Augustine’s view that God is being itself is based partly upon Platonism (“God is that which truly is” and partly on the Bible—“I am that I am”). The transcendence of time as a condition of full reality is a central theme…[in Augustine’s work].[1]

Of course Augustine was one of the seminal thinkers of all Church history. Along with Aquinas he’s probably one of the two most important theologians of all time. He might be called the last thinker in the tradition of the classical age. His view of the Trinity cemented the Orthodox position and set the Western view of Trinity on it’s trajectory diverging from the eastern Church. His work The City of God is one of the greatest theological master pieces of all time, and to think it’s a letter to friend (a letter the size of the New York Phone book).
Augustine expresses the concept of the super-essential Godhead many times and in many ways. Augustine was a Platonist. In that regard perhaps his greatest innovation was to place the Platonic forms in the mind of God. That is a major innovation because it trumps the Neo-Platonistic following after Plotinus, who conceived of a form of the forms. In Augustinian understanding the equivalent of the “the one” the form that holds all other forms within itself is the mind of God. Augustine never made an argument for the existence of God because for him God was known with certainty and immediacy. God is immediately discerned in the apprehension of truth, thus need not be “proved.” God is the basis of all truth, and therefore, cannot be the object of questioning about truth, since God is he medium through which other truths can be known.[2] Tillich said:

Augustine, after he had experienced all the implications of ancient skepticism, gave a classical answer to the problem of the two absolutes: they coincide in the nature of truth. Veritas is presupposed in ever philosophical argument; and veritas is God. You cannot deny truth as such because you could do it only in the name of truth, thus establishing truth. And if you establish truth you affirm God. “Where I have found the truth there I have found my God, the truth itself,” Augustine says. The question of the two Ultimates is solved in such a way that the religious Ultimate is presupposed in every philosophical question, including the question of God. God is the presupposition of the question of God.  This is the ontological solution of the problem of the philosophy of religion. God can never be reached if he is the object of a question and not its basis.[3]

Augustine says God is truth. He doesn’t so much say God is being as he says God is truth. But to say this in this way is actually in line with the general theme we have been discussing, the one I call “super-essential Godhead,” or Tillich’s existential ontology.  Augustine puts the emphasis upon God’s name as love, not being. Since he was a neo Platonist he thought of true reality as beyond being and thus he thought of God as “beyond being.”[4] This makes no sense in a modern setting since for us “to be” is reality, and to not be part of being would meaning being unreal. But in the platonic context, true reality was beyond this level of reality and what we think of as “our reality” or “our world” is only a plane reflection of the true reality. We are creatures of a refection in a mud puddle and the thing reflected that is totally removed from our being is the true reality. It was this distinction Tillich tried to preserve by distinguishing between being and existence.
Augustine looked to the same passage in Exodus that Gilson quotes in connection with Aquinas. Augustine’s conclusions are much the same about that phrase “I am that I am.” This is one of his key reasons for his identification between God and truth. He saw the nature of God’s timeless being as a key also to identifying God with truth. The link between God and truth is the Platonic “one.” Augustine puts the forms in the mind of God, so God becomes the forms really. The basis of this identification is based partly upon God’s eternal nature. From that point on it’s all an easy identification between eternal verities, such as truth, eternal being, beauty, the one, and God. The other half of the equation is God’s revelation of himself as eternal and necessary through the phrase, for very similar reasons to those listed already by Gilson, between I am that I am and being itself (or in Augustine’s case the transcended of being). “He answers, disclosing himself to creature as Creator, as God to man, as Immortal to mortal, eternal to a thing of time he answers ‘I am who I am.’”[5]
From Psalm 101:25 he ponders the phrase “generation of generations” rather than the choice of saying your years is endless.” He concludes that this Psalm is not merely saying God is living through a parade of endless years but that God is timeless. He concludes that the generation of generations is a timeless generation. He concludes that God’s years are his substance, they cannot be separated from God himself (as we see ‘substance” can be a way of saying “being). “God’s years are God’s eternity, his eternity is God’s very substance.” Thus God is not only eternal but his being his essence coincide, his eternal nature is the same as his being. Thus God is eternal necessary being.[6]
Two issues have been of greatest concern to the atheists on CARM: (1) The issue of "the basis of what is" and (2) the issue of correspondence means "not exactly."
On the first issue I made the argument that God is the basis of all that is, therefore, God is more truly what than the contingent things that dependent upon him for their existences. They seem to think that the basis for something can't participate in that of which is it is the basis. Since the basis of something can't be the basis if it doesn't exist, the basis of all things would have to be one of those "all things" that does it or it can't be the basis of them. While the basis of cheese may not be cheese, but "milk" the basis of all that is, must be or it can't be the basis of anything.
On issue two, correspondence includes a variation or a latitude, that latitude invokes two poles, a like and not like. So as one thing corresponds to another it can do so exactly or only a bit. So there's a leay way there and it has a likeness poll and and a no like poll. That is not a basis for excluding an exact likeness. There can be 1x1 correspondence. The atheists of course, desperate to have something to argue, tried to insist that a correspondence can never be exact so I am wrong ot use the equal signs in my title: God = truth.  I consider that a knit pick. Maybe so, I can always tweak it. The correspondence between God and what is is exact since God is part of what is.
sources

[1] Reality: Readings in Phlosophy. Indianapolis, Indiana:Hackett Pulbishing company, inc. Carl Avren Levenson, John Westphal, editors, 1994, 54
[2] Donald Keef, Thomism and the Ontological Theology: A Comparison of Systems. Leiden, Netherlands: E.J. Brill, 1971, 140.
The “two Ultimates” discussed are philosophy and Religion.
[3] Paul Tillich, Theology of Culture, 12-13
[4] The quotation above from the Levenson and Westphal book says Augistine believe God was being itself, Marion seems to say that Augustine put God beyond being. I think it’s debatable as to which he did because he didn’t say directly which it was. I’m assuming Marion is probably right just because of the time in which he lived and because he was a Platonic thinker.
[5] Levenson and Westphal, Ibid. translated by Edmond Hill
[6] Ibid, trans in Enarrationes in Psalm. 101

Posted by Joseph Hinman (Metacrock) at 5:25 AM