Things Fall Through the Cracks: The Religous a priori 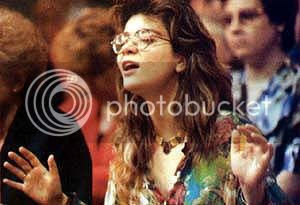 Discussion on CARM over the weekend revealed some interesting developments. I feel that the way one echange worked out it more or less confrims one of the first God arguments I ever made on the net. This is my religious apriori argument:

The point is that things fall through the cracks. Scientific induction seeks to create a probabilistic average and then establish a regularity of observation based upon the probability. On that basis miracles and supernature are ruled out. Since things do fall through the cracks, there's no basis for asserting miracles don't happen. The regularity of description can't be taken as solid as long as observation is not 100% accurate.

(2)There are other ways of Knowing than scientific induction
(premise)

(3) Religious truth is apprehended phenomenologically, thus religion is not a scientific issue and cannot be subjected to a materialist critique
(inference)


Therefore, religious belief is justified on its own terms and not according to the dictates or other disciplines (conclusion)


In my dealings with atheist in debate and dialogue I find that they are often very committed to an empiricist view point. Over and over again I hear the refrain "you can't show one single unequivocal demonstration of scientific data that proves a God exists." This is not a criticism. It's perfectly understandable; science has become the umpire of reality. It is to scientific demonstration that we appear for a large swath of questions concerning the nature of reality. The problem is that the reliance upon empiricism has led to forgetfulness about the basis of other types of questions. We have forgotten that essentially science is metaphysics, as such it is just one of many approach that can be derived from analytical reasoning, empiricism, rationalism, phenomenology and other approaches.


Is empirical evidence the best or only true form of knowledge? This is an apologetics question because it bears upon the arguments for the existence of God.

I will ague that empiricism is not true source of knowledge by itself and logic is more important.

True empirical evidence in a philosophical sense means exact first hand observation. In science it doesn't really mean that, it implies a more truncated process. Consider this, we drop two balls of different size from a tower. Do they fall the same rate or the bigger one falls faster? They are supposed to fall at the same rate, right? To say we have empirical proof, in the literal sense of the term we would have to observe every single time two balls are dropped for as long as the tower exists. We would have to sit for thousands of years and observe millions of drops and then we couldn't say it was truly empirical because we might have missed one.

That's impractical for science so we cheat with inductive reasoning. We make assumptions of probability. We say we observed this 40,000 times, that's a tight correlation, so we will assume there is a regularity in the universe that causes it to work this way every time. We make a statistical correlation. Like the surgeon general saying that smoking causes cancer. The tobacco companies were really right, they read their Hume, there was no observation of cause and effect, because we never observe cause and effect. But the correlation was so tight we assume cause and effect.

The ultimate example is Hume's billiard balls. Hume says we do not see the cause of the ball being made to move, we only really see one ball stop and the other start. But this happens every time we watch, so we assume that the tight correlation gives us causality.

The naturalistic metaphysician assumes that all of nature works this way. A tight correlation is as good as a cause. So when we observe only naturalistic causes we can assume there is nothing beyond naturalism. The problem is many phenomena can fall between the cracks. One might go one's whole life never seeing a miraculous event, but that doesn't mean someone else doesn't observe such things. All the atheist can say is "I have never seen this" but I can say "I have." Yet the atheist lives in a construct that is made up of his assumptions about naturalistic c/e and excluding anything that challenges it. That is just like Kuhn's paradigm shift. The challenges are absorbed into the paradigm until there are so many the paradigm has to shift. This may never happen in naturalism.

So this constructed view of the world that is made out of assumption and probabilities misses a lot of experience that people do have that contradicts the paradigm of naturalism. The thing is, to make that construct they must use logic. After all what they are doing in making the correlation is merely inductive reasoning. Inductive reasoning has to play off of deductive reasoning to even make sense.

Ultimately then, "empiricism" as construed by naturalist (inductive probabilistic assumptions building constructs to form a world view) is inadequate because it is merely a construct and rules out a priori much that contradicts

In this exchange that was part of another thread HRG basically admits to my suspicions about the circular nature of naturalistic assumption.

hey I didn't say the universe doesn't work in a regular fashion. I said there can be things that fall through the cracks. you ant got no crack catcher if we know what I mean.

There could be, but are they the best explanation for data ? My catcher catches less likely explanations.
you fail to offer one for my data.

Meta:
Uuntil you prove your descriptive power is 100% you have no right not accept miracle claims as merely further observations that are beyond your observational powers.

I have a perfect right not to accept the miracle claims as genuine, and not based on a measurement error. That they are genuine is not the most likely explanation.
no you don't. the evidence has met a reasonable prima facie burden.

Meta:
nope. you don't. statistics don't help there because they are supposed to be rare. besides your stats in error since the rule out those things that your ideology lead you to ban form reality.

And it's your ideology that wants us to accept the less likely explanations. All your arguments in favor of an actual resurrection are based on alleged regularities which are much less well confirmed as the regularity that dead bodies stay dead.

Meta:
you can't use a regularity that you wont accept as law. your notion of it is totally one of observation and the counter observations change the game. you drag in the idea of "I have my record dead people stay dead," not always. in at least 100 cases they did not. you can't decide those are nixed becuase the other cases are not.you want laws of physics when they suit you and you wont suspend them when they don't suit you. They don't suit you when they imply mind. a mind greater than yours.
(at some juncture he argues that UFO's and Bigfoot could be allowed in history and turned into fact by accepting miracles. "You have no way to prevent that."

Meta:
sure I do. I don't have any reason to ague for them. you are making anther bad appeal to analogy. The idea that If we allow X into your thinking we might to allow this other case that very similar to X. So there can't be miracles because wee don't want UFO's. that's not logical.

they don't' have to be. You want to reduce natural law to observations. The observe rations you want to take as law are not complete. you want to erase those that don't suit your world view. This is absolute you can't have it both ways.

you want to create a law out of statistics but things fall through the cracks. that is exactly what my argument from religious a pirori says. you just confirmed one of my God arguments.

Get it ? Miracles are not the most likely explanation. Not an impossibility.

how many times has this song and dance been done? every single time there's a miracle claim it's ruled out on the bias of others like it being ruled for the bogus reason that "it's more likely that it wont be."

BTW, there are more eye-witness claims for UFO abductions than for the resurrection.

Once we introduce the concept of quality over quantity, quality of observation that goes way down.

It's not like we don't have any prima facie evidence to back up miracles. See my stuff Lourdes.

Posted by Joseph Hinman (Metacrock) at 5:22 AM