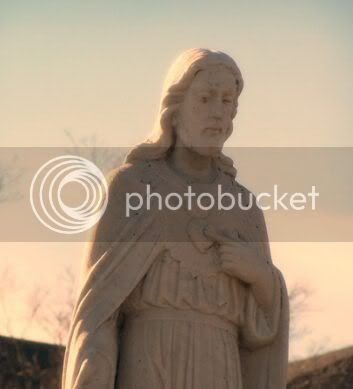 A friend of mine could not enjoy easter because he was agonizing over theories of a skeptical nature. Here is the advice I gave him:

Ok here it is. NO offense to Chris, BK or others who term themselves "conservative." They might be offended by the term "fundie" and I guess it has come to be fairly pejorative. But the "conservatives." spend so much of their rhetorical strategy and pin so much of their ethos on the historical nature of Jesus and the early events of the church as accurate, they do forget that all of that is the tradition of the seven ecumenical councils. It was actually the seven councils and created the church as we know it, write the major doctrines that we think of as "orthodox." Jesus never said "thou shalt believe the Trinity." Paul never said "three persona in one essence." Jesus didn't say "Make ye a bunch of creeds and hold a bunch of councils."

That doesn't mean that I don't believe it's important to hold the creeds or mind the councils, I do. It doesn't mean I don't think the Trinity is not a good summation of some relation of God to himself that we can barely glimpse and even more dimly understand, I do think so. But the truth of it is the church, Christian doctrine and Christianity itself in a sense was the creation and creature of the church fathers and the councils. That doesn't mean that I don't believe that Jesus hung on the cross for our sins or rose from the dead. I do believe those things fully and completely. But we can't really prove those happened in history. We really do have to take the early church and the magisterium's words for it.

The real center of faith in terms of documentary proof is found in the church fathers and the tradition, and the church's teaching authority. that's the only thing that gives the church a teaching authority, the trust that they really were vested with a deposit of truth based upon the apostles choosing bishops to pass on the deposit.

we can't really prove it from history.

Of course that's not to say that the case for it is weak. It's as strong a case as anything we know of history in the ancient world. All history is probability and all proof rests upon someone's authority at some point. All those periodic tables one sees in science class rest upon the trustworthiness of an editor at a publishing company.

People like Roger Pierce are practically making a second bible out of the church fathers, so they can use it to back up the first bible. The thing that makes all of this fly is the experinces we have in own personal lives. of God and God's presence. Our experinces in prayer are the necessary confirmation that makes the tradition trustworthy. the first place to look for proof of the Christian faith is not the historical achieves but one's on prayer time.

The problem with the mythers and skeptics is they see everything as a glass half empty. It's always turned to the worst end. Same evidence, radically different conclusion, because they are scared to death to make a leap of faith. Now we need as much raw historical documentation in place as we can get. That's all very important, I"m saying to forget that. But it's also not the basis of faith.
Posted by Joseph Hinman (Metacrock) at 9:43 AM

What do you think of Marcus Borg's distinction between the pre-Easter Jesus (what we can be fairly confident about concerning the Jewish teacher and son of a laborer who challenged the oppressive religious, social, and political institutions of his day ala the tradition of prophets such as Amos, Micah, etc and who was executed for sedition) and the post-Easter Jesus (how this enlightened Spirit person and his relevation about how to know God was transformed into powerful mythic imagery which can lead people to a new vision of and orientation to the Divine)?

Oh, and also speaking of Easter, I dropped this post into a thread by zarove and it may have gotten lost in the shuffle.