Waiting for Godot on the Silentest Night of the Year 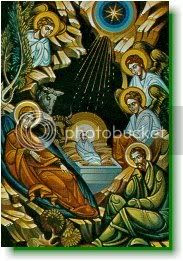 Arguming with atheists on message boards this Christmas eve I find that they are scandalized by the cross. Of course that is as it shoulbe.Yet at the same time that they complain that the incarnation is irrational and that the atonement is silly and primitive and barbaric they also mock my views of God because they don't tell us enough about God as an entity. They are not science and they fall into silence. They are struck by the silence of God. They are always saying why is God hiding why is God silent. That reminds me of what Beckett said about divine aphasia (the inability to recall words) and divine athombia, which is visual language. I love that quote, it's in one of my favorite plays, Waiting for Godot:


This appeals to me, I think, because in a whimzical way it mocks the basis of many philosophical concepts about God and in its final degeneration into nonsensical sports talk we are seeing Beckett's usual technique for making the point that in the face of the ultimate truth we can do no more than fall silent..It begins as though describing some empirical scientific study ("according to the work of Puncher and Watmann"), rattles off a number cleches such as "for reasons unknown" every time it mentions a divine purpose, in the end degerates into nonsense and falls silent, as we must all do when confronted with the fact that God is beyond our understanding. But this hints at the concept of God that I struggle with. Struggle? Yes, I struggle with it because I can't just chuck the fatherly love of God; yet I don't see God as a big guy int he sky. Ok well I do but I know that that is a projection of the super ego and God transcends it. Yet I have nothing to replace it with. I see God as the Hegelian dialectic or some repository for the laws of physics, or some rule why which things work out, like the Tao. YEt in addition to all of this I have to see also a God of love who cares. Yet how can the Hegel dailectic care?

God's reach downward from the rarified air of "mystery" to the warm fuzzy of Christmas is accomplished through the incornation. That's what Christmas is about. Jesus is the bridge whereby God becomes human and understands and loves humans. Bridges work both ways. So through that we can understand only dimly and fleetingly the idea that God transcends any sort of human understanding.

Hbr 1:1 ¶ God, who at sundry times and in divers manners spake in time past unto the fathers by the prophets,


Hbr 1:2 Hath in these last days spoken unto us by [his] Son, whom he hath appointed heir of all things, by whom also he made the worlds;


Hbr 1:3 Who being the brightness of [his] glory, and the express image of his person, and upholding all things by the word of his power, when he had by himself purged our sins, sat down on the right hand of the Majesty on high;


We can see this means God's grasp on questions such as pain and torment in the world cannot be judged by human standards. This would like trying to estimate the difference between the understanding of virus and what clear grasp of the human condition a virus actually has, vs. an understanding that would be far beyond that of the most brilliant thinks of the human race.

Trying to judge God by the standards through which we judge each other would be idiotic. We could say God can't understand human pain and is only dimly aware of it. But the fact that he tried and that he reached out and bridged the gap through Christ indicates that he does understand. That makes the failure to deal with it in the here and now all the more mysterious, but it doesn't mean that God doesn't have a handel on the problem; it means ony that we don't understand that.

Now atheists hate the repair to mystery, they see it as a cop out. Ordinarily I have to agree with them. As a former atheist that is one thing that drove me up the wall when I would argue with Christians, every time you get them in a corner they try to get out by repairing to mystery; no one knows the mind of God. I don't think what I'm saying here is that, because I'm not saying we can use this mystery to close down any sort of questioning about theodicy. I'm just saying that the true reasons for it are not something we can ever really know in words; although perhaps we can know it in mystical union with God.

Incornation had one goal in mind: atonement. Christ was born to die, and to rise. Is that barbaric? Of course it is! atheists are right to be put off by it. It would be pointless to offer an image of suer and spice and everything nice when the whole point of it is to show God's willingnes to enter our pain and to identify with us. Now atheists are always saying "O that was nothing for God, he can do anything, so it didn't rally hurt. Besides crucifiction is not the most painful daith I can imagine." I can show you a guy on a message board right now saying this very thing. I could link to the very post, but I've seen it so many times what's the piont? Yet he's right, and yet wrong. It would be pointless of God to hold a contest of pain. God could suffer more than all of humanity put together and still not be challenged or dinted. That's nto the point. The point is God's demonstration to us that he is in solidarity with us. Who cares that some have suffered more than Jesus, if that is possible, its not a context but a symbol. We have open the power of the symbol and take it as God's promise.

Through the relationship of solidarity, of identification with us, we enter into Christ's death and express our solidarity for him. This is basically what Paul says in Romans six about how we aer baptized into Christ's death. Through that identification we have relationship with God and that creates the grounds upon which sin is forgiven! This is God's speechifying to us. This is how the silent God, gripped by divine apasia speaks to us and shows us through his divine athombia the truth of his love; he becomes one of us, dies at the lowest social level, as a criminal, a "loser." He is raised from the dead to a new hope and a future. Through this solidarity with us, this identification, we are raised to a new hope and a future in Christ!

It's prefectly Hegelian: the Fahter is the thesis, the son the anti-thesis, and the resurrection in the Spirit the synthesis. I told you I saw God as the Hegelian dialectic. So God speaks through is actions in Christ as the incornate solidarity with humanity. He shows us visually that he is identified with us. But we must enter into that solidarity and step out in faith to walk in newness of life.

The whole point of the play Waiting for Godot is not that they are waiting for God, but that they are waiting for the big human payoff; meaning, or social utopia, or to get rich, or find God, or whatever. But God is a good metaphor for thi concept. They are waitng for this big thing that suppossed to be coming but never quite does. Not to say say that Beckett was a christian, although I could argue that we can't say he wasn't. He hated Catholics but liked protestants and was interested in Christian philosphy all his life. It is not implaussable to thin that one sees Christian symbols in Beckett. The two tramps in Waiting for Godot, Didi and Gogo, wait by a little tree, withered and small. This is symbolic of the world tree. But one might take the world tree as an archetype of the corss, especiallyt his one in the paly. They are waiting by the cross, they can never quite committ they neve quire undersand; Godot has already come!
Posted by Joseph Hinman (Metacrock) at 1:08 AM