Whatever became of the postmodern science wars? 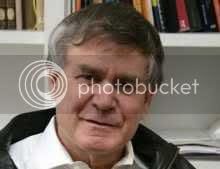 While doing some research on one of my favorite topics, science and social constructivism, I came across an article written some time ago, by Richard Rorty.[1] I had just been arguing against Rorty on my message boards. He was one of my big nemesis in graduate work. He was the epitome of why I began to study postmodernism, when I saw it as the big threat to Christian gospel. This article I like. I came to agree with the constructivist, although in the more reasonable form of that view, epitomized by Thomas Kuhn  or Ian Hacking (see below). I have defended the view of science as social construct on CARM for years, and been called names and so forth for doing that.

This is a good article, I enjoyed, by Rorty in Atlantic monthly in 1999, responding to the "Sokal Hoax." For those who don't know what that is, Alan Sokal a physicists put out an article baiting the science-is-a-social-construct crowd by saying extremely ridiculous statements that seemed to agree with them, such as "science no longer supports the idea of an world outside the mind." When a bunch of the constructivist crowd hailed these statements Skoal came back and said "you are nuts, can't you tell I'm pulling your leg." There is an article online where Sokal discusses the hoax, what he thinks he proved and didn't prove.

Here is what Steven Weinberg wrote about it:


Like many other scientists, I was amused by news of the prank played by the NYU mathematical physicist Alan Sokal. Late in 1994 he submitted a sham article to the cultural studies journal Social Text, in which he reviewed some current topics in physics and mathematics, and with tongue in cheek drew various cultural, philosophical and political morals that he felt would appeal to fashionable academic commentators on science who question the claims of science to objectivity.
The editors of Social Text did not detect that Sokal's article was a hoax, and they published it in the journal's Spring/Summer 1996 issue.1 The hoax was revealed by Sokal in an article for another journal, Lingua Franca;2 he explained that his Social Text article had been "liberally salted with nonsense," and in his opinion was accepted only because "(a) it sounded good and (b) it flattered the editors' ideological preconceptions." Newspapers and newsmagazines throughout the U.S. and Britain carried the story. Sokal's hoax may join the small company of legendary academic hoaxes, along with the pseudo-fossils of Piltdown man planted by Charles Dawson and the pseudo-Celtic epic Ossian written by James Macpherson. The difference is that Sokal's hoax served a public purpose, to attract attention to what Sokal saw as a decline of standards of rigor in the academic community, and for that reason it was unmasked immediately by the author himself.
The targets of Sokal's satire occupy a broad intellectual range. There are those "postmoderns" in the humanities who like to surf through avant garde fields like quantum mechanics or chaos theory to dress up their own arguments about the fragmentary and random nature of experience. There are those sociologists, historians, and philosophers who see the laws of nature as social constructions. There are cultural critics who find the taint of sexism, racism, colonialism, militarism, or capitalism not only in the practice of scientific research but even in its conclusions. Sokal did not satirize creationists or other religious enthusiasts who in many parts of the world are the most dangerous adversaries of science,3 but his targets were spread widely enough, and he was attacked or praised from all sides.[2]

This is Rorty's counter attack. Rorty is a constructivist (as If you you can't tell by his statement "there's no truth out there.").

Read the whole article it's pretty good. It's called "Phony Science Wars." (AtlanticMonthly digital edition Nov 1999). The article uses Ian Hacking [3] as the defender of a rational view of constructivism. Hacking is one of my favorites. I discovered him way back in my early doctoral work. He was doing history of science at that point.


IAN Hacking -- the most intellectually curious and imaginative philosopher of science now writing -- is a member of the third group. In this spirited and eminently readable book he suggests that the combatants climb down from the level of abstraction on which they debate such topics as the nature of truth, the nature of science, and the nature of rationality, and focus instead on three questions: Are the best scientific theories of our day the inevitable results of serious inquiry, or might science have taken a different turn and still had equal success in building bombs, say, or curing diseases? Do these theories tell us about the intrinsic structure of reality, or are they simply the best tools available for predicting and controlling nature? Are the longest-lasting and most frequently relied upon theories stable because they match a stable reality, or because scientists get together to keep them stable, as politicians get together to keep existing political arrangements intact? Philosophers like Latour and Kuhn, wary of the idea that reality has an intrinsic nature that scientific inquiry is destined to reveal, are inclined to say that science might have done as good a job if it had never come up with either quarks or genes. As they see it, scientific progress is like biological evolution: no particular life-form is destined to emerge, and lots of different ones might have turned out to be equally good at survival. In this view, scientific theories are tools that do a job. They do it well, but some other tools might perhaps have done the same job equally well.

The stalemate that Hacking brilliantly describes but does not try to break is between many scientists' intuition of the inevitability of quarks and many philosophers' suspicion that the claim of inevitability makes sense only if the idea of the intrinsic structure of reality makes sense. This teeter-totter between conflicting intuitions is, Hacking rightly says, a genuine intellectual problem. Which answer one gives to his third question -- about the source of the stability of the most reliable bits of science -- is likely to be a matter of which side of the seesaw has most recently descended.

These alternating intuitions have been in play ever since Protagoras said "Man is the measure of all things" and Plato rejoined that the measure must instead be something nonhuman, unchanging, and capitalized -- something like The Good, or The Will of God, or The Intrinsic Nature of Physical Reality. Scientists who, like Steven Weinberg, have no doubt that reality has an eternal, unchanging, intrinsic structure which natural science will eventually discover are the heirs of Plato. Philosophers like Kuhn, Latour, and Hacking think that Protagoras had a point, and that the argument is not yet over.

The most vocal and inflamed participants in the so-called science wars are treating the latest version of this fine old philosophical controversy as a big deal. In the very long run, perhaps, it will prove to be one. Maybe someday the idea of human beings answering to an independent authority called How Things Are in Themselves will be obsolete. In a thoroughly de-Platonized, fully Protagorean culture the only answerability human beings would recognize would be to one another. It would never occur to them that "the objective" could mean more than "the agreed-upon upshot of argument." In such a culture we would have as little use for the idea of the intrinsic structure of physical reality as for that of the will of God. We would view both as unfortunate and obsolete social constructions.

[1] Richard Rorty (October 4, 1931 – June 8, 2007) was an American philosopher. ... Rorty tied this brand of philosophy to the notion of "social hope";
Educated at the University of Chicago and Yale University


Richard Rorty was an important American philosopher of the late twentieth and early twenty-first century who blended expertise in philosophy and comparative literature into a perspective called "The New Pragmatism" or “neopragmatism.” Rejecting the Platonist tradition at an early age, Rorty was initially attracted to analytic philosophy. As his views matured he came to believe that this tradition suffered in its own way from representationalism, the fatal flaw he associated with Platonism. Influenced by the writings of Darwin, Gadamer, Hegel and Heidegger, he turned towards Pragmatism. https://www.iep.utm.edu/rorty/

Most noted work: Philosophy and the Mirror of Nature. 1979
Educated at the University of Chicago and Yale University
Taught @ Princeton University among others
Rorty Wikipedia


[3] Ian MacDougall Hacking (born February 18, 1936) is a Canadian philosopher specializing in the philosophy of science.


"Ian Hacking (born in 1936 in Vancouver, British Columbia) is one of the world's leading scholars in the fields of philosophy and history of science. He has made important contributions to areas as diverse as the philosophy and history of physics; the understanding of the concept of probability; the philosophy of language; and the philosophy and history of psychology and psychiatry. In spite of this diversity there is one regulative idea that pervades all his work: Science is a human enterprise. It is always created in a historical situation, and to understand why present science is as it is, it is not sufficient to know that it is “true”, or confirmed. We have to know the historical context of its emergence." https://www.holbergprisen.no/en/ian-hacking/about-ian-hacking.html (read more)


( Department of Philosophy - University of Toronto)

Born: February 18, 1936, Vancouver
Noted Works :  1975 when Hacking wrote Why Does Language Matter to Philosophy? and The Emergence of Probability.
Education: The University of British Columbia, ...

Posted by Joseph Hinman (Metacrock) at 12:58 AM