Schleiermacher and the Feeling of Utter Depedemce 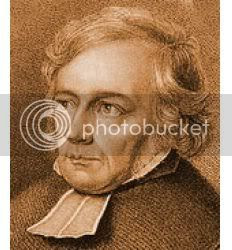 This concept comes from Frederick Schleiermacher, whose concept of the feeling of utter dependence was the first indication of the trace, it is one of those kinds of experiences that forms the co determinate. He first unveiled this notion in On  Religion: Speeches to It's Cultured Despisers. [1]The early version of the feeling was very crude. It went this: I know God must be real because I feel love for him when I pray to him." By the time he wrote the huge tome Glaubenslehre (the Christian faith)[2] He had a much more sophisticated version of it. First I'm going to try to communicate my simplistic understanding of that and then talk about it in a more complex way.

When people hear "feeling" they often make the mistake of thinking that he's saying something like God makes me feel good so there must be a God. I've seen major theologians make the mistake of assuming he meant this kind of feeling. It was the notion of Dr. William S. Babcock (Perkins school of Theology SMU) when I took his history of doctrine class, that he mean something more along the lines an intuitive sense. I have discussed this with Babcock many times through out the years. When hear utter dependence they think it's control or an unhealthy sense of need. What I think he was getting at there is more on the order of contingency.  It's really more like we sense the unity in the world around us. We sense the unity in the world but then we also sense it's dependence upon some higher basis. So the unity is pinned to a higher necessity. In a sense it's like  feeling the realities that the cosmological argument only speculates about, in action. We catch the basis of cosmological necessity as it does it's thing.

The sense of the feeling is found in reflection but is of an intuitive nature.  It's much like Heidegger describes being, as "ready to hand." Like a carpenter who doesn't have to think about using his tools, he uses them as extensions of his hands because he's so use to them they are part of him. So our place in being is so a part of us we don't think about it. "Life world," or Labeinswelt is a term used in German philosophy. It implies the world of one's culturally constructed life, the "world" we 'live in.' Life as we expeirence it on a daily basis. The unity one senses in the life world is intuitive and unites the experiences and aspirations of the individual in a sense of integration and belonging in in the world. As Heidegger says "a being in the world." Schleiermacher is saying that there is a special intuitive sense that everyone can grasp of this whole, this unity, being bound up with a higher reality, being dependent upon a higher unity. In other words, the "feeling" can be understood as an intuitive sense of "radical contingency" (in the sense of the above ontological arguments).

He goes on to say that the feeling is based upon the ontological principle as its theoretical background, but doesn't depend on the argument because it proceeds the argument as the per-given per-theoretical per-cognitive realization of what Anselm sat down and thought about and turned into a rational argument: why has the fools said in his heart 'there is no God?' Why a fool? Because in the heart we know God. To deny this is to deny the most basic realization about reality.


As Robert R. Williams puts it:

There is a "co-determinate to the Feeling of Utter dependence.

"It is the original pre-theoretical consciousness...Schleiermacher believes that theoretical cognition is founded upon pre-theoretical inter subjective cognition and its life world. The latter cannot be dismissed as non-cognative for if the life world praxis is non-cognitive and invalid so is theoretical cognition..S...contends that belief in God is pre-theoretical, it is not the result of proofs and demonstration, but is conditioned solely by the modification of feeling of utter dependence. Belief in God is not acquired through intellectual acts of which the traditional proofs are examples, but rather from the thing itself, the object of religious experience..If as S...says God is given to feeling in an original way this means that the feeling of utter dependence is in some sense an apparition of divine being and reality. This is not meant as an appeal to revelation but rather as a naturalistic eidetic"] or a priori. The feeling of utter dependence is structured by a correlation with its whence."[3]

Atheists are obsessed with the need to prove. You can't believe anything unless its proven. There are deep ways of knowing and they are afraid of them. They label them "subjective" and try to stay away from them. Although I think if they faced the truth they would have to come to terms with fact that their faith that scinece will one once and for all free us from the big mean angry God is the same subjective sense of seeking a deep assurance that transcends proofs on paper. I don't think they will ever get it. The fact that they reject looking for it says that they will never find it.

It's not exactly mystical experience. It's something one can sense on a quite evening listening to the sounds of traffic from while sitting in the garden. It's a realization of a reality that we sense at some level all the time. It's more akin to an eastern appraoch than a Western. That's not to say that eastern mediation is just wool gathering. The feeling of utter dependence is not something one can apply in a formulaic way as one does meditation. It's just there, we can realize it's presence. One of the primary concerns of Schleiermacher was that religion not be reduced to other aspects such as knowledge. Religion is not jumped ethics or failed primitive knowledge. It's not about knowing more stuff it's about transformative experience. Certain forms of knowledge are an outgrowth or side effect of that. The kind of knowledge it gives us is exitential and phenomenoloigcal.


[1] Frederick Schleiermacher, On Religion: Speeches to it's Cultured Dispisers

construction of the doctrine of God.

Posted by Joseph Hinman (Metacrock) at 4:24 AM