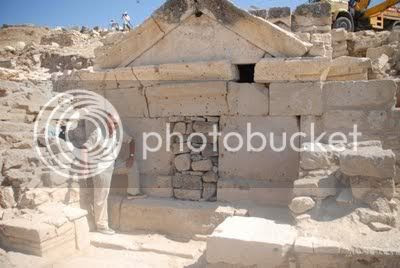 Tomb of Philip at Hierapolis

Fun filled Friday: debating atheists what could be more fun? The topic: Jesus existed as a man in history

The Jesus mythers use phony standard of proof real historians don't use. Historicity was given to Pilate for having only two mention's, outsides the Bible, We have ore than two sources making the connection to Jesus.

Jesus has two mentions in different passages by Josephus, Here I link to an article I wrote about Peter Kirby's straw man argument making the evidence from Jo look weak. I show the case is very strong,


Papias and The Daughters of Philip, and polycarp


http://religiousapriorijesus-bible.blogspot.com/2010/05/philip.html
Papias had several important connections to the history of Jesus. He studied with his friend Polycarp and they both studied under the Apostle John. There is a controservy about weather it was the Apostel John or another John, I will deal with that on Papias own page. He lived in Hierapolis where he was Bishop there was also Philip and his four virgin daughters. The daughters of Philip were prophetesses, Paul is said to have met them in Acts (8:5-40; 21:8-9. ), and Papias is said to have met them as well. Eusebius speaks of this in the same passage that he speaks about Papias:

The residence of the Apostle Philip with his daughters in Hierapolis has been mentioned above. We must now point out how Papias, who lived at the same time, relates that he had received a wonderful narrative from the daughters of Philip. For he relates that a dead man was raised to life in his day. He also mentions another miracle relating to Justus, surnamed Barsabas, how he swallowed a deadly poison, and received no harm, on account of the grace of the Lord.[6]

Polycrates testifies (AD 190) to existence of these daughters and their burial and their father's burial at Hierapolis, "Philip of the twelve apostles who sleeps in Hierapolis and his two druthers, elderly virgins, and another of his daughters who after living in the Holy Spirit rests in Ephesos."[7] William Tabbernee documents an inscription from Hierapolis honoring a public figure which links the burial of Philip the apostle with the monument in his honor, the "martyrium." It refers to him as "the glorious Apostle and Theologian Philip.[8]  Of course there are problematic details in these accounts. Other accounts give four daughters, Polycrates seems to only know of there. There is a controversy as weather or not this Philip is the evangelist of Acts (one of the first decons) or the Apostles, one of the twelve who traveld with Jesus. No one really knows. In a famous debate between a Montanist (Prokolos) and an Orthox (Gaius) reference is made to the four daughters of Philip as having resided in that area and being burried there.[9] There is a possiblity that the tomb of Philip has been discovered:

they are so strident that didn't exist on atheist sites, so where are they?

I think they know the myther thin g is Bull shit.

"The residence of the Apostle Philip with his daughters in Hierapolis has been mentioned above. We must now point out how Papias, who lived at the same time, relates that he had received a wonderful narrative from the daughters of Philip. For he relates that a dead man was raised to life in his day. He also mentions another miracle relating to Justus, surnamed Barsabas, how he swallowed a deadly poison, and received no harm, on account of the grace of the Lord."

I'm puzzled how this argues against mythicism. On the contrary, what we have is someone who is testifying to have learned about Jesus not through anyone's experience, but through the paranormal revelations of prophetesses. Or was the paragraph misleadingly worded?

No not what it says. Their father was an eye witness to Jesus' life and ministry so obviously they would have learned about him through that in addition to that that did prophesy. Papias knew several, of Jesus' disciples and that's t how he learned of Jesus.