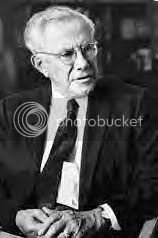 Paul Tillich
Athesits are always talking about how stupid theology is. "I don't have to read the theology because I know it's stupid." I hear various ones (not all but many) say that all the time. I would like them to actually read some theology and tell me why it's stupid. Here is some theology for them to read. They are always saying "what else would you use but scinece?" What that really means is their self selected set of facts form scinece that back their ideology, excluding those that disprove their ideology. My answer to them is "phenomenology." But you have to read this to know how it works.

Tillich was born August 20, 1886, in Starzeddel, then a province of Brandenberg, Germany (now part of Poland), family moved to Berlin 1900. His father was a Luthern Pastor. He was ordained as a Luthern Pastor in 1912 and kicked around giving lectures at various universities: Berlin, Dresden and Frankfurt.[1]

His liberalism and opposition to the Nazi movement led to his dismissal in 1933. Fortunately, Reinhold Niebuhr, whom he had met in Germany, offered him a position at the Union Theological Seminary in New York. Tillich became a U.S. citizen in 1940, then took up a position at Harvard in 1954, followed by one at the University of Chicago in 1962, where he was to remain until the end of his life.[2]

Paul Tillich is the central figure in the current effort; Heidegger is definitely a major influence upon Tillich. Be that as it may the great Theologian did not merely copy off the philosopher’s understanding of being. Tillich was a influenced by Heidegger philosophically, but was also his political enemy. The former was a leftist and a socialist, the latter a right-winger and Nazi. Tillich was coming from the perspective of a larger tradition; Christian theology is not all Aristotelian, there’s a whole Platonic wing that produced centuries of complex and brilliant ferment form which the average communicant is totally cut off. That tradition also has it’s own take on being. Tillich lived in that tradition like a fish lives in water. Perhaps it was Heidegger’s connection with the “life world” that gave him his connection to Nazism through the notion of the folks, the soil, the people and their traditions.[3] It’s easy for us to judge looking back on Nazism as the emblematic evil, while we forget many intelligent people were duped by it. Perhaps it was Tillich’s connection with the medievalists and his love of the Platonic that enabled him to see the valuable connections in Heidegger’s ties to the past. Tillich was not a dusty scholar, however, stuck in the library with no connection to the life of the day. He was a vibrant intellectual of modernity and he constantly tried to bring his medievalism into the present and understand it in a modern light. He used Heidegger to modernize. Nevertheless, in the world of their present, however, Germany of the 1930’s these arid philosophical issues took on a concrescence of life and death.
Tillich’s response to the political situation of his day was a proving ground for his theological method, and he responded to the crisis of Germany in the twenties and thirties the same way he responded to modern theology; by relating the human situation in which he lived to the larger picture of faith and the Christian and seeking the psychological points of contact where the human perception of God manifested it in symbolic terms pointing to our ultimate concerns. Tillich contrasts “Kerygmatic” theology with “apologetics.” Kerygma refers to the unchanging truth, and this contrasted with the temporal situation, always in flux.[4] Tillich’s concept of “the situation” includes the cultural context of time and place. Tillich is the embodiment of his own concerns. He more than any other theologian of the twentieth century, personified liberal theological credo; translating the timeless truth of the Gospel into the moment in one’s own cultural context, as he advocated doing.
Tillich’s major methodological move is called “correlation.” In a nut shell, he correlates the great truths of Christian doctrine, though an understanding of the symbols it uses, with the existential apprehensions within the current situation, when the two stack up in some way, he lined them up.[5] Tillich understood this as a philosophical task, even for theologians. The task of the philosopher must draw upon material from all realms of culture.[6] One central question give focus to the entire inquiry: what does it mean to exist? Tillich understood this as an “existential” analysis. The cultural context of this term as used in that era meant that the question was central to human understanding.[7 The term “existential” is closely related to phenomenology. Both deal with allowing the sense data to suggest the categories into which we organize the data. Both deal with human understanding as rooted in its own immediate life situation. It begins with the perspective of the individual in the concrete situation. One immediate implication of this aspect is that it might suggest that we ignore the phony Aristotelian perspective of which atheists try to hard to root themselves, the “rational man,” the “scientist” (meaning “reductionist”) who decides before the tally is ever made that there can’t be anything beyond the material. This “rational man” is a phony place to start because it automatically rules out the transcendent, the sacred, the aspects of human existence that have always meant the most to people. It assumes form the beginning that there’s “nothing there” and reality must be defined by pre set ideology involving the wearing of white lab coats.
As the term “existential” implies, the perspective is concerned with the meaning of existence. According to Tillich’s perspective of the existential self understanding rooted in the standard point of the meaning of existence was the primary issue and fundamental problem around which all of human understanding orbits. “Existence is the question which underlies all other questions.”[8] Yet Tillich did not pin the answer upon existentialist dogma. Nor did he root the answer in the situation itself. The answer would not come from the situation but from the universal and timeless message brought by the symbols of the Christian faith. This is no retreat to the ivory tower; it’s an attempt to bring the truth of the message to the place where it is needed, the actual concrete situation of life, and to apply in a relevant way. Tillich said “the method of correlation explains the content of the Christian faith through existential questions and theological answers in mutual interdependence.”[9]
The term “correlation” Tillich uses in three different ways. It can indicate the correspondence of a series of different sets of data; it can designate the interdependence of concepts; or it can designate the real interdependence of things in structural wholes.[10

This is a crucial passage in Tillich, because these concepts, his take on symbols and their participation in what they symbolize, the use of symbols as the delivery system for revelation, meaning, answers, as well as the religion of the eternal and the temporal, these are the concepts which form the basic engine of his ontotheology. [12] In the next chapter these concepts will be crucial in formulating the meaning of “being itself, “ or “the ground of being.” There has been a certain degree of fear expressed by various theological concerns that correlation relativizes the divine or makes God dependent upon man. Tillich argues that God is not dependent upon man but our understanding of God’s revelation to us is dependent upon our willingness to understand. Solidarity between humans and the divine is dependent upon our willingness to be in solidarity.[13] Thus it is also dependent upon our wiliness to seek correlation.
The methodology of correlation proceeds as follows: In analyzing the human situation the theologian demonstrates that symbols used in the Christian message offer answers to the existential questions that arise. The answers are much older than existentialism. Tillich points out that they are as old as humanity and they have been expressed in many ways since humans began to think philosophically.[14 In pondering our existential condition we realize that we are strangers in the world and we can’t penetrate beyond the surface level of science. In coming to grasp this realization we also realize that we ourselves are the answer to this problem. Because we are human, because we are trapped in an existential dilemma we automatically have the credentials and the method for moving beyond the surface level, which is the level of science, and penetrating the nature of being. Though our state as examples of being for itself we are able to understand the nature of existence. This is where we can employ philosophical thinking in understanding our own being. “whoever has penetrated into the nature of his own finitude can find the traces finitude in everything that exists. And he can ask the questions implied in his finitude as the question implied in finitude universally.”[15]
Sources
[1] Sam Addision, Website for Gifford Lectures. “Authors, Paul Tillich.” URL http://www.giffordlectures.org/Author.asp?AuthorID=169 visited 10/20/10.
[2] Ibid
[3] find
[4] Michael Gleghorn. “Paul Tillich’s Theological Method: A Summary Evaluation.” Online PDF file, URL: http://michaelgleghorn.com/documents/PaulTillichsTheology.pdf
visited 10/28/10. no pagination.
Gleghorn is a conservative from Dallas Theological Seminary so his ultimate evaluation of Tillich’s theology is negative. He finds that Tillich is prone to error due to his method. Yet his summary of Tillich’s view is cogent.
[5] Gayton B. Hammond, “An Examination of Tillich’s Method of Correlation.” Oxford Journals: Journal of The American Academy of Religion Vol XXXII, Issue 3, 248-251. On line version URL: http://jaar.oxfordjournals.org/content/XXXII/3/248.extract . Visited 11/8/10, Hammon is professor of Philosophy and Religion at Virginia Polythechnic Institute in Blacksberg Va. Ph.D. Vanderbilt, Yale Divinity School.
[6 Ibid.
[7] Ibid.
[8] Ibid.
[9] Paul Tillich quoted in Alistter E. McGrath, “Paul Tillich: Method of Corroletion,” The Christian Theology Reader. (online page 53) Maldan Ma, USA: Blackwell Publishing, Alister E. McGrath ed. first published 1995, second edition 2001-2004 Google books online version URL: http://books.google.com/books?id=yDls7tV0mRcC&pg=PA52&lpg=PA52&dq=Paul+Tillich+Method+of+Correlation&source=bl&ots=81AvGNSD_Z&sig=0deQITzlW4LAUyLi10IR0wZdolY&hl=en&ei=-2bJTNTjB4G0lQf66YDBAQ&sa=X&oi=book_result&ct=result&resnum=2&ved=0CB0Q6AEwATgK#v=onepage&q=Paul%20Tillich%20Method%20of%20Correlation&f=true visited 11/8/10.
[10] Ibid.
[11] Ibid.
[12] Ontotheology, I understand that this term is used mockingly of thinkers such as Tillich. It’s like the term “phalologocentric” it’s a means of saying “this is out of date,” ‘this is opposed to our truth regime.” I therefore use it proudly and defiantly.
[13] Tillich in McGrath, Ibid.
[14] Ibid. 54
[15] Ibid.
Posted by Joseph Hinman (Metacrock) at 3:24 AM