No Will Greater Than My Own? 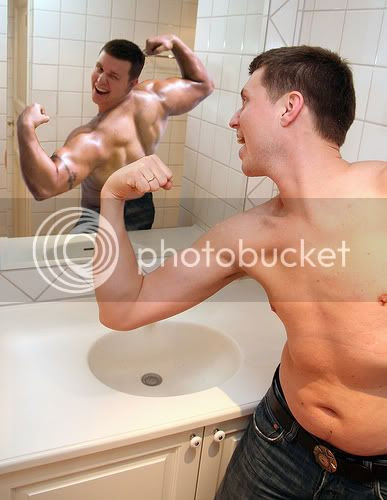 The other night I received an IM from a guy who posts on a certain message board. He's an atheist and we had exchanged a few barbs here and there, but didn't really know each other. He didn't attack me, he was polite enough but he said some very disturbing things. First he began with a lot of break the ice sort of questions, such as was I a YEC and what did I think about it? We got into a very shallow exchange about God arguments, by that I mean neither of us got into it deeply enough to say anything profound. Then he began to say that if God was real, he would still choose to go to hell. Why? He said he hates God. He said in no uncertain terms as he proceeded to issue forth the most blasphemous stream of bilge, complete with all sorts of imagined violations of God's body, I'm suer the reader can fill in the blanks. I asked him way he felt that way he said "no evidence." Well, I told him, he's bordering on abusive lanague and what he said if he could do it would definitely get him in put in jail. No one says stuff like that just because there's no evidence. That's pure hate, no one hates something (or someone) just because you can't prove they exist. He said "I hate dictators."

Now I can well imagine things one would say about why God might be considered a dictator, especially the God of the OT. But I asked him Why is God a dictator. The answer floored me. I expected him to say wiping out the Amalekite babies and such, but instead he says "he tells people what to do." I ventured the theory that a dictator is more than just someone who tells people what to do. God, in so far as he created us, might actually be in a valid position to tell us what to do. He seemed not to understand that concept. I don't think this guy speaks for all atheists. I think he might be just a fringe element, but it made me think. A week or so latter I had a discussion on my boards and it was enough like a lot of other discussions of that topic (moral issues, grounding of ethical axioms) that I have to wonder, do the atheists of this generation, the gen xer atheists really understand the concept of authority? Has no one ever introduced them to the notion that there might be a valid authority that really has the right to tell one what to do?

I am sure that atheists can understand this concept, what I'm not sure is that it has been sufficiently pounded into their heads to the extent that they are willing to actually take it seriously. The Xaths are the product of the selfish, hedonistic seventies and the "go along get along" "we generation" eighties, via their parents. That should make them more docile toward authority, but it also means they may never have been taught that there's a valid reason to think of a will higher than their own. They may resent a will that others purport to know but for which they can find no overt empirical demonstration. Following rules of a system is one thing, but submitting to the unseen is another. This is not something that we can reason about intellectually, its' a cultural difference, a generation gap, and there may be no way to bridge it. What was the discussion on my boards that made me wonder about all this?

The issue was advanced by an atheist friend that morality is genetic. Of course they have no data and certainly have no empirical proof, but sometimes atheists are content with speculation and assumptions, when it suites their side. So the argument is advanced, morality is genetic. we have genes to tell us right from wrong, thus we need no appeal to God. But the Christians counter with the bit a bout objective ethics. So it becomes the usual hum drum argument, "tastes great, less..." I mean, objective moralist vs. no need for God. I argued that objective morality is not the issue. The real issue is grounding of ethical axioms. Morality is not objective, but axioms can be grounded or ungrounded. God provides grounding because he created the universe and thus, is the author of its purpose. But the atheists counter by saying that being author doesn't give God any privilege at all. They are free to do as they please because if God was really kind he would have created them as robots so they wouldn't have worry about moral choices. I have seen this argued a hundred times. I've seen it argued on every major atheist board from CARM to Sec Web.

Many atheists will give it a long protracted argument; so what if God created me. That doesn't give him the right to tell me what to do. He's no more special than a drunk in bar on Saturday night. But every time I try to argue that God is necessary to ground axioms many of them chime in with "no he can't because he doesn't exist." This is merely circular reasoning. They are confusing the distinction between the effects of God's hypothetical existence upon meta ethics, and the actual fact of God's existence. Clearly this is circular since the answer to the question "if God did exist what difference would it make to morality?" Just cannot be "God doesn't doesn't exist so he can't make any difference." Then we spend about fives posts going "If he exists," "but he doesn't exist," "if he exists," "but he doesn't exists..."

I think the problem is it just never occurred to them to ground their moral axioms in some higher authority because they have always been taught to think of themselves as the ultimate authority. I wonder if perhaps they are coming at this from the stand point of consumers. They can understand following rules, but ultimately no other will can be imposed upon them since for each one he/she is the final authority and the only one to whom he/she must answer. If one worships the self, the highest blasphemy is that I am not the center of the universe.This is why my argument about the atonement as solidarity is as big a scandal to them as the financial transaction model or any other model. They see no logic in it and no sense. For the willingness of God to be in solidarity with them would be major blasphemy because God dares to put himself on equal grund with them. This must be what Paul meant when he said there would come a future generation that would be lovers of selves rather than of God.

Of course there are exceptions. There are valid concerns, I am not saying there are not. One such valid concern is wiping out the Amalekties. I am not saying that there aren't problematic Bible issues that have to be dealt with. But when push comes to shove the major cultural difference is, I think, that this nrew trend of atheism, while not very significant numerically, may represent the coming to fruition of many issues unresolved revolving around the ego in the modern age. As modern people we see ourselves as individual units, with rights, invested with a total package of personhood; a package that includes right, privileges, and revolves around the "punctual self" as the center of all navigation in the world. We see this tendency to center self in the world and make the world go around it in the Descartes and in the philosophy of modern world. I think, therefore, I am. I am the center, my perceptions determine reality. There is no tribe, there is no higher power there's only what I want and what I can get and what I have to put up with to get it.

Of course they realize that they have to cooperate. Of course they realize that we can't all be the center so we have to work together, that's why they have teleological ethics. Ethical means can't be based upon duty and obligation, that would necessitate another will than my own. I have to form a corporate will for the purpose of cooperating in society so not duty, but outcome becomes the major sticking point for moral value. That outcome revolves around soft values, like greatest good for greatest number, or avoiding pain since we can't impose anything upon anyone. Outcome ethics always leads to a disaster because it proceeds from the premise that there is no duty to impose and the only obligation is to cooperate so we can all have what we want. It can easily lead to the sacrifice of a small helpless group to support the cooperation for the greater number, because after all, the greatest good is getting what I want. Thus Regan's contra war of the eighties could be justified upon utilitarian grounds; and utilitarians supported the salve trade, because the "ignoble" black man had to be sacrificed to support the greater good (white people making money). I am not saying that atheists are on a par with slave traders. Please don't misunderstand me. This is not an argument about atheists not having morals. Atheists can have morals but they can't ground their axioms. They have to coast on Christian memories to ground their axioms.

There could be no stronger grounding than the authorization of the author of the universe. But we cannot move into this through winning rational arguments. One sees on message boards the bitter result of trying to confront the secular minded hoards with logic and theology. We have to find some new way around it. We have to get our bearings again. We are spoiled to live in a society which coasts on Christian memories. We have to find again the way Paul did it. We have to find out how to live in the power of God. We have to show the power and love of God to a pagan world. But it should help to understand the intellectual basis of the struggle.
Posted by Joseph Hinman (Metacrock) at 5:41 AM