Is Religion LItterally a Metaphor? 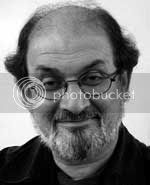 
I saw Salman Rushdie on PBS, having a discussion with Bill Moyers. Rushdie is an atheist, he refurred to himself as "total atheist." But, he is one of hte most enlightened people I've ever heard speak about religion. Yet .Rushdie is nothing like the atheists I encounter on the Internet. He actual reads real theologians. He's not negative toward religion, he says nothing to imply religious people are stupid or religion is bad.In fact he seems to think religion is basically a good thing. He says, paraphrasing, if you want to believe that there is some organizing princple to unites and hold together the physics of the university with morality, and call that God, why should I object? Not only does he seem so insightful because is positive twoard religion but because his criticisms of are fair minded and not insulting.

One such criticism he made in the interview with Moyers (8/23/06) is that religious people tend to think that one cannot be moral without an overarching absolute source of authority to make morality right. But morality is the seeking to question "is this right? Is this wrong" Ruddie points out that one need to be religious to question that many non religious people find answers and live consistently with their answers.

This is a fair criticism. I have always contended that there are many atheists--I know many-- who have a strong sense of morality and loads of character, even though most Christian might disagree with many of their choices. My criticism, which I think Rushdie's argument does not answer is that even though atheists can be moral, because society is coasting on Christian memories, they do not have a logical grounding for their axioms. Rudhdie's view was refreshing that he questioned relativism saying that it is dangerous to do without a fixed standard. Yet without logical grounding for axioms it is my belief that those Christian memories will fade and society will degenerate into relativism simply because they wont have an adequate basis for adopting a particular standard.

Another of Rushdie's, criticisms, although it applies more to fundamentalism than to all of religious belief, the idea of enshrining some way of life or point in time long past. This is a criticism I can get behind. Even though it speaks to the fundamentalists more than to the main stream, it really speaks to religions that emphasize an ancient sacred text.It seems to marking out a sacred text enshrines a particular moment in time, a culture, a belief system, a way of life, a way of understanding the world, as paradigmatic. The ancient world of the Hebrew, pre temple and first temple really becomes the major paradigm for Christianity because it was the model for Jesus in his adherence to the law.

The difference between the fundamentalist who wants to force the back to some Golden age of orthodoxy, vs the liberal is who is able tom meet a Salman Rushdie half way is not so much in terms of authoritarianism, although that is a manifestation of the real issue. The real issue is one of metaphor. The fundy wants to literalize the metaphor and say "this really is the way it is; God really is a middle eastern Suzerian from the 3d from the late Bronze age." The liberal is able to say "no, this image of the Suzerian points to certain aspects that give us a hint as to what God is like, but there is also a "not like" dimension. Does this metaphor extend to the deity of Christ? the Historical Jesus? The atonement? The Resurrection!?? I'm going to bracket this question and deal with it on another day, but I will deal with it soon. Certainly the difference in literalizing or understanding the metaphorical nature of an image, is the difference between imposing one's will upon others, vs allowing others to choose the their own metaphors. This open attitude that comes from the realization of the metaphorical mandates a secular space for government and market place of ideas.

SALMAN RUSHDIE: Well, I think, you know, certainly in India, in the foundation of India the great founding fathers of India, like Mahatma Gandhi and Jawaharlal Nehru were absolutely convinced that to secularize India was the only way actually of keeping the various communities safe. But in order to avoid a repetition of the bloodshed of partitioning you had to not allow any religious community to dominate any other. And therefore you had —India was given a secular constitution. Now what's happening I do think in a certain way is that many people perceive failures in secularism. You know, I mean I think if you look at the rise of Islamic radicalism you can say that Iranian — the rule of the Ayatollahs — was created by the failures of the secularist Shah of Iran.

Ah but the secular Shah of Iran did not foster a true democracy. He was put in power by a CIA coup in 1954, he rueld with an iron hand, and the roots of the revolution in Iran in the 1970's were as much a secular and Marxist political student revolution, as much or more so than the Islamic aspects. I had a friend whose father was an eitor of a major Tehran daily at that time. So was fairly well informed about the roots of that revolution. In any case, it is true that the religious wars of Europe (1500-1660) could only be stopped when a secular space was created in which everyone's religious view was safe in their private realm, and everyone was free to participate on equal footin in the secular public realm. Reformed fundamentalists want to turn back the clock to the Reformation, but they have no idea who much misery and destruction the reformation actually brought about.

Creating a secular space requires the creation of a demoncratic process. This requires exchange of ideas freely and without criteria of truth imposed from without. The secular sapce must make room for the arist as social critic:

SALMAN RUSHDIE: But this is the time honored role of the artist to speak truth to power, you know, and if you look at what is happening in the Muslim world some of the writers signing that manifesto are particularly concerned with the oppression of women, which is a very big subject and in the Muslim world. Others are concerned with the oppression of freedoms of speech and assembly. And others are concerned with simple — the creation of kind of overarching world view, which makes it impossible for people to consider the concept of freedom. You know, that's to say it simply not available, for discussion, you know. And one of the awful things about long term mass censorship is that in the end people can lose a sense of what it's like to live in a free world. You know, because it's not--there's nothing automatic about it. It's a thing you have to fight for and preserve.

Ironically, religion can only flourish in this secular space.This is so becasue the artsitic urge to "speak truth to power" is really an extention of the prophetic urge. This is what the prophet does. To heed the call of the prophet is to heed the word of the Lord. The artist is not a mockery or a coutnerfit of the prophet, but a geniuine instinct born of the infertace between the religious instinct and human urge to create which is the living out of the Imago dei in which we were created. God is creator, humans made in God's image are creative too. When this urge to create is combined with the desire to truely seek God we have the prophet. In both cases it is the metaphorical aspect that makes criticism and truth possible. When one is trying to impose one's own view upon the world as the truth of God one is merely imposing one metaphoircal interpretation as literal truth. When one understands the metaphorical, as only artsis can, one is free to explore deeper meanings becasue one is not stuck with an incomplete eternal truth that can't be questioned.

BILL MOYERS: And we always think in this country that persecution will lose, but it doesn't always lose.

BILL MOYERS: It sometimes so changes the frame of reference that people who grew up in it, that they no longer have any sense that there's something beyond it.

SALMAN RUSHDIE: Exactly. That is the final victory, you know. That's the final victory of oppression. And I think we need to make sure that that doesn't happen, you know. And I think it's important to speak up. And I think it's very interesting that more and more and more now almost every week you see some new powerful voice being raised, you know. Whether it's Ayaan Hirsi Ali, whether it's Wafa Sultan, whoever it may be. Many of these voices are women. And I've often thought that in the Muslim world the big change may come because Muslim women reject the oppression that they've been subjected to.

I saw that interview, too, and appreciated Rushdie's respect for religion just as much as you. I think he would probably have agreed with you that the artist speaking truth to power is an extension of the prophetic urge.

It's been several weeks since I saw it, but I remember him offering that religion could be a negative thing, causing violence and such, yet on the other hand it could be a positive thing, inspiring great works of art and so forth. I remember feeling disappointed that in the positive column he did not list positive morality, to counter the violent morality that he had put in the negative column.

Your post speaks to that issue; it's the same thing that hit me watching the program.

Yea that was a great interview. He's very intelligent and I like the sense of clearity and good vibes I get from him.

Hmm. I wish I'd seen the interview. Maybe it will come 'round again.